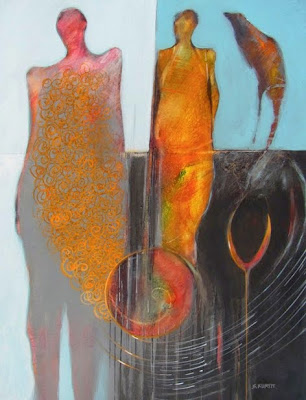 A self-described "evolving painter," Stan Kurth approaches figurative work with archetypal rather than narrative imagery. Working primarily in acrylic and gesso on Yupo, he uses a subtle palette to create rich, multi-layered pieces that hint at other levels of reality, partially hidden from our understanding.

Stan's work has been widely exhibited and collected and he has an impressive string of awards to his name. He recently became a Signature Member of the National Watercolor Society and is featured as one of the ten "Ones to Watch" in the December 2011 issue of Watercolor Artist magazine.

Please hop over to Stan's website and his blog to read more about him and see more of his work. 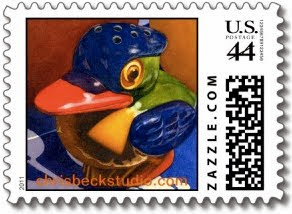 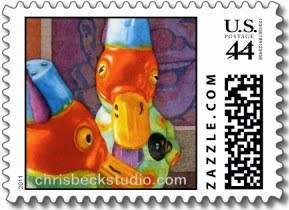 Waiting in the Wings – first-class postage

How cool is it to use your favorite crazy critter to mail a letter?? I've just posted two new postage stamps to my Zazzle shop, ChrisBeckStudio. Hope you'll stop in to check them out!! To receive special offers from Zazzle, scroll down to the bottom of my shop page and enter your email address in the box provided. If you're like me, you're looking for ways to stretch your dollar and Zazzle periodically has excellent special deals that bring the price down to nearly the face value of the stamps. 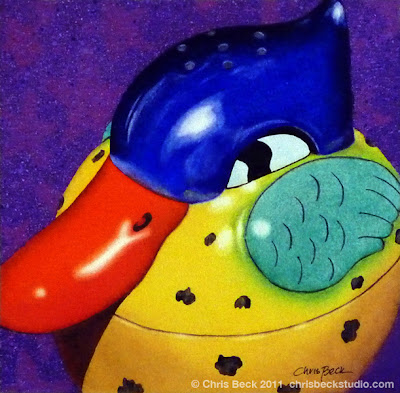 This demo piece was lurking unfinished in the flat files so I decided to play with the background. I've painted this image twice before, initially with a plain cobalt violet background and then with a deep purple/magenta background of feather shapes. I had found a roller designed for painting walls that has stars scattered over the roller and thought it might work well.

As I usually do before working on the actual painting, I tested my idea on scrap paper. I put the star roller on its handle, poured some masking fluid in a tray and rolled the stars through it, making sure they were well-coated. Then I rolled it carefully across the paper so the stars wouldn't get too distorted. After the masking dried, I brushed a simple wash across it and when that dried, removed the masking with a rubber cement pickup. 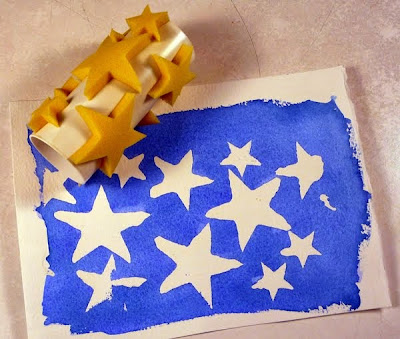 Satisfied with my experiment, I cut a frisket film for the duck and rolled a star pattern across the background. After removing the frisket, I painted Winsor violet on the background around the duck, let it dry, and then removed the masking. I painted a deep rose across the entire background and followed that with several more washes to get the color depth I wanted. Unfortunately, the end result was a bit intrusive and the color was dull, so I decided to enhance it a bit with spattered gouache. 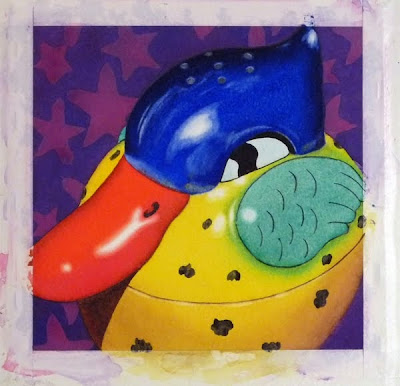 Because I would be spattering paint with a toothbrush, I didn't have to make a water-tight seal on the duck image. I cut a piece of frisket film roughly the size of the duck and laid it in place, smoothing it out before trimming it. 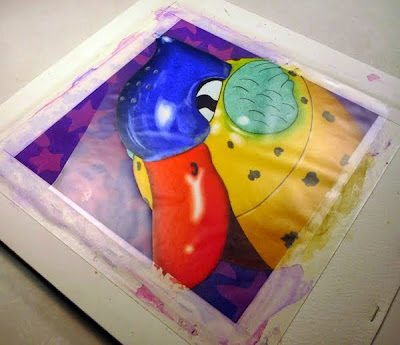 With a new X-acto blade in my knife, I gently cut along the outline of the duck and removed the excess film. I pressed it down firmly with my fingers, but did not burnish it down. 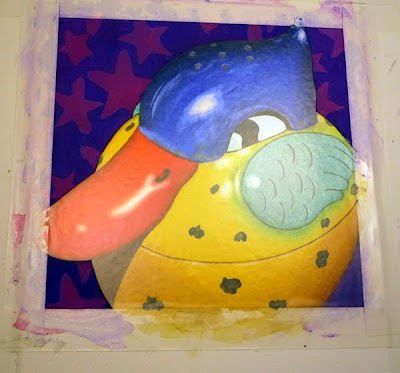 Using an enamel tray, I put out small dabs of gouache of a deep magenta, deep ultramarine, and permanent white. I mixed up a medium magenta and a medium blue-purple and spattered them with a flat bristle toothbrush. (Be sure to protect your work surface with newspapers!!) The size of the spatters are related to the amount of water in the paint puddle, so it takes a bit of experimenting to get the size droplets you want. Generally, the more water, the larger the droplets. 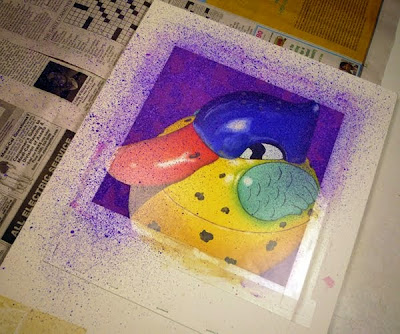 I ultimately used five or six different shades of magenta and purple, spattering until I was satisfied with the appearance of the background. (Note that, unlike watercolor which dries lighter than it appears when wet, gouache dries slightly darker.) Then I removed the frisket, pulled the masking tape off the edge of my painting, and signed it. You can see that there was a significant amount of leakage under the tape. This is not a serious problem, since I always mat my paintings, but I prefer a cleaner edge on my non-demo work. I normally use a better tape for protecting the border -- Nichiban tape -- which I discussed in this blog post a while back. 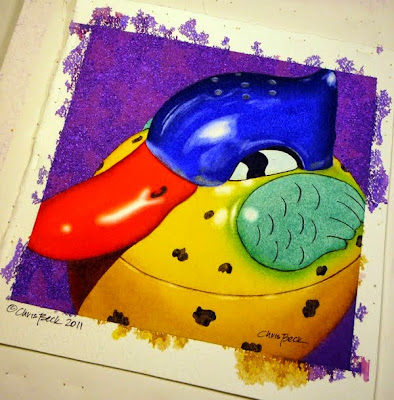 Here, once again, is the finished painting! 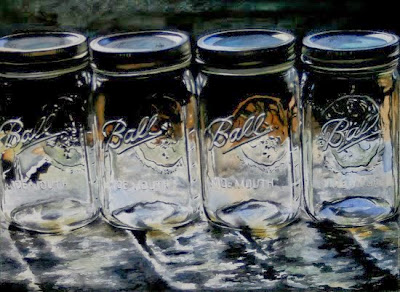 Ten years ago as a young Air Force bride, Carrie Waller picked up a "how-to" book on watercolor and taught herself to paint. She soon began teaching classes, but it wasn't until two years ago that she got serious about her own work. Shortly after the arrival of her second son, she committed herself to starting a blog and producing a painting a week -- a challenge that she has successfully met for the past two years. With her husband recently deployed to Afghanistan for six months, she is continuing her blog activities and is also exhibiting and selling her work, in addition to her responsibilities as a full-time mom.

Carrie currently has three pieces in the Randy Higbee 6" Squared show in Los Angeles, she just won first place at the Louisiana Watercolor Society's Juried Member Show, and her entry into the LWS's 41st Annual International Exhibit this past spring was featured on the show invitation. In addition, she has had a wonderful year of exhibit successes, winning awards in many of the shows she entered.

Please hop over to Carrie's blog and to her website to read more about her and see more of her work. 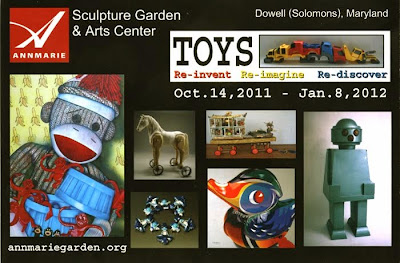 I was delighted to discover this weekend that my painting is featured on the postcard for the TOYS show at the Annmarie Sculpture Garden & Arts Center in Dowell (Solomons), Maryland.

Equally delightful is this excerpt from the juror's statement: This exhibit cradles an adult's mastery of craftsmanship with a child's sensibility of play. [These artists] keep one foot in the studio, and the other in the sandbox. Pablo Picasso said, "Every child is an artist. The problem is how to remain an artist once we grow up." These artists have uniquely answered his query. -- Andrew Wodzianski, Professor of Art, College of Southern Maryland

The show consists of 60 pieces by 33 artists, with a mix of two- and three-dimensional works. It will run until January 8, 2012. See their website for hours and directions to the center.
Posted by Chris Beck at 10:23 PM 8 comments: 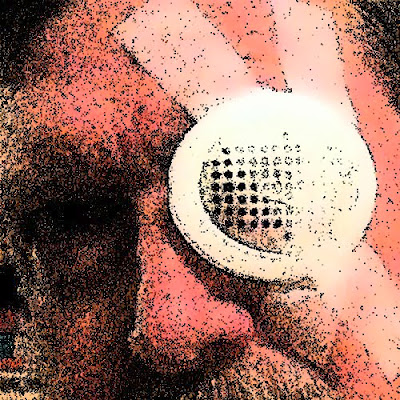 Well, maybe it's a stretch, but Señor Terremoto and I are trying to put the best spin on this we can!!

I'm probably going to be offline for a bit -- my husband had surgery to repair a detached retina about a week ago and he must remain in a face-down position much of the time for approximately two weeks. He is allowed to be up to eat and shower, but that's about it. We rented a chair that resembles a massage chair -- with a special U-shaped face support -- and he sleeps on a special foam pad setup that we bought just for the occasion!! He has a two-way mirror that's supposed to let him watch TV or movies, but it's not an ideal way to view the world.

And now the moral of this tale: if you have any odd visual symptoms -- new floaters, hazy vision, bursts of light -- speak up!! And get to an opthalmologist as soon as possible!! Treated early, a detached retina is likely to be much less disruptive to your life.