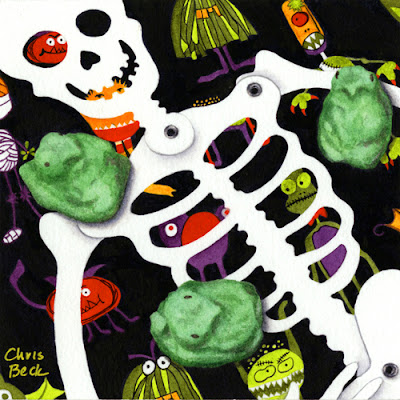 Last Easter, I found a box of oddly shrivelled green Peeps on the shelf at one of the local stores and initially rejected them as too creepy for Easter. But when I shifted my point of view, I decided that they might be just the thing for Halloween, so I went back and bought them. (I laugh to recall that I was worried they might not be there when I went back, two days after I first saw them. Guess shrivelled green Peeps don't say Easter to anybody else either!!)

Despite the fact that I had all the "ingredients" for a funky Halloween painting, I had a lot of other things going on and pretty much had abandoned the idea of a Peeps painting this year. But yesterday, I woke up with a bolt of inspiration.  I didn't actually get at the painting until mid-afternoon and I finished at midnight (with time out for dinner) -- quite possibly a record time for me.

So, for your Halloween viewing pleasure, Ladies and Gentlemen, I give you: Zombie Peeps!! 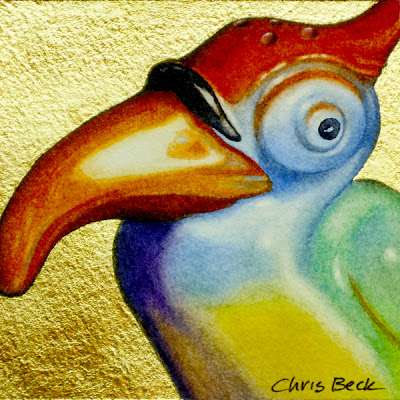 After seeing some dynamite paintings of autumn leaves with stunning gold leaf backgrounds by my friend Carrie Waller, I decided to try gold leaf to cover a dull and muddy background (don't ask!) on this painting of one of my vintage salt shakers.  I'm very happy with the results and it reminds me of an icon painting now -- no blasphemy intended.

It's been ages since I used gold leaf, and then it was to cover a little wooden box as a gift for a friend.  I'd forgotten a few things in the intervening years. Such as: don't breathe any heavy sighs of exasperation when things aren't going well because you'll only increase your exasperation as bits of gold leaf in your work area scatter like real-world leaves in a windstorm!! And: be sure you don't inadvertently get any sizing (basically diluted glue) on your fingertips or they'll be gold-leafed along with your art and there'll be little holes in the gold leaf on your painting!!

It was a fun experiment and I may try to do more with this technique, but right now, I need to prep a demo I'm doing next Wednesday for one of the local art leagues.  Hmmm -- wonder if they'd like to see a gold leaf background?
Posted by Chris Beck at 11:20 AM 6 comments: