For those who have been following the reports I've made on my tests of Mission Gold watercolors, I have some encouraging news to share.  I have been in email conversations since late June with Dennis Kapp, the Chairman of the Martin F. Weber Company -- the distributor of Mission Gold -- and he has asked me to share this offer.

As previously reported, according to Mr. Kapp, Mission Gold has reformulated 50 of the 90 colors in the original line, replacing pigments of poor lightfastness with more dependable ones.  Mr. Kapp is offering to replace any fugitive color from the old line with its lightfast equivalent from the newly formulated colors.  It doesn't matter if the tubes have been used, or even emptied.  As long as you still have the tubes, you can return them for replacement.

To receive replacements, send your old tubes* of fugitive colors -- along with your snail mail return address -- to:

You will receive, by return mail, a new tube of the equivalent color for each tube of the fugitive colors that you send in.

I am sharing this news in the interest of my readers, but I do not have a full list of pigments used in the original line and cannot answer questions about specific colors.  You can check my previous blog post for details on the colors I tested.  I believe some of the same pigments were used in making other colors as well, so you may be able to determine whether you have fugitive colors by checking the labels on your tubes and comparing pigments to those covered in my review.

For those interested in learning more about pigments, I recommend two websites -- Art is Creation and Handprint -- or books by Michael Wilcox and Hilary Page.

* I'm adding my suggestion: Out of consideration for the people who will be opening your returns, remember to pack the tubes in something that will prevent them from being squashed and ruptured in the mail. 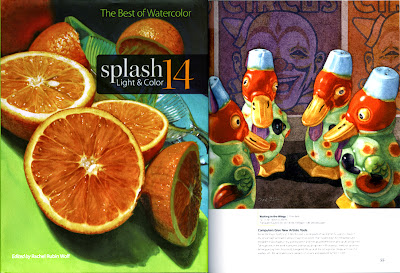 My copy of Splash 14 arrived a few days ago -- with my fun ducks featured on page 55.  North Light Books does a fantastic job -- the quality of the book is exceptional and I'm thrilled to be in the company of so many wonderful artists, many of whom are my friends.

Each Splash book is a treasure trove of the best in contemporary watercolor and a wonderful source of inspiration. You can order from the North Light Books shop -- they have both hardback and e-versions available.
Posted by Chris Beck at 12:39 PM No comments: 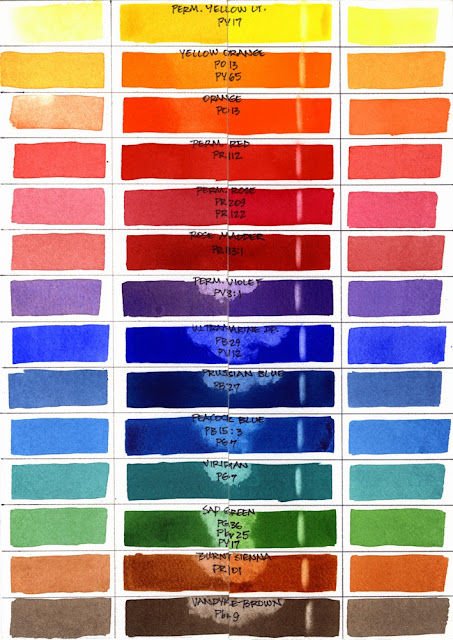 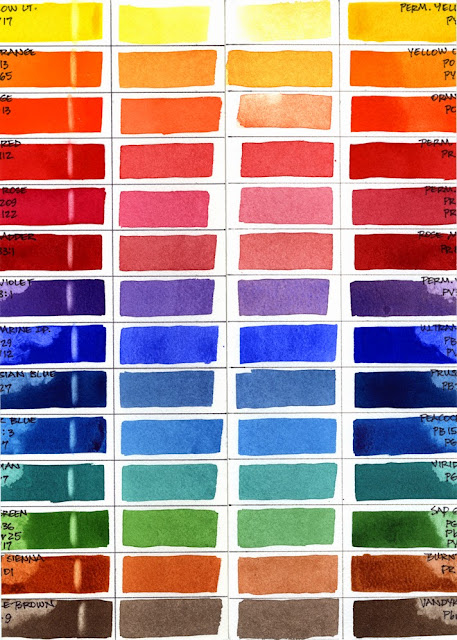 This is the last post for the lightfastness tests of Mission Gold watercolors that I began in mid-January.  For the last month, I had the sun-exposed card in a window that got much more sun and there was even more fading to the dodgy colors.  As I explained in detail last month, the fading was not unexpected because the pigments used in those colors are rated as poor to fugitive.

Since I posted my previous update, I have had several emails from Dennis Kapp, the chairman of the board of the Martin/F.Weber company, which distributes the Mijello Mission Gold watercolors in the U.S.  Needless to say, he was not happy to see my negative review and said he wished I'd told them about my tests so he could have given me newer, more lightfast colors.  Fortunately, I kept the email correspondence I'd had with his employee, starting with the sample set I received in mid-September, in which I'd pointed out that there were problems with the pigments used in the line.  Although she told me in early January that they were beginning to look at lightfastness matters and would update me, I never heard another word until I received Mr. Kapp's first email in late June.

According to Mr. Kapp, Mijello has reformulated 50 of the 90 colors in the line after receiving feedback at a watercolor society opening last year that there might be a lightfastness problem. (I strongly suspect that the feedback to which he is referring was set in motion by my comments to a watercolorist friend during the National Watercolor Society reception in late September last year.  My friend brought my concerns to the attention of a watercolorist friend of his -- a woman who had been distributing sample sets of Mission Gold at the NWS reception. But perhaps somebody else also expressed alarm about the pigments.)

In his first email, Mr. Kapp listed the pigment changes to the paints that I tested. I've checked them against the lists of reliable pigments, and they are all acceptable.  He also explained that they are creating two versions of some colors -- those labelled as "bright" will be less lightfast.

Mr. Kapp tells me that they have been shipping the newly formulated colors to their dealers for about 60 days now and have instructed their dealers to give replacements for any of the fugitive colors, even if the tubes have been partially used.

I applaud the company for taking this step, but I have to caution you to be careful. Dick Blick is the only major art supply house that is selling Mission Gold, as far as I can determine.  There is no indication that they are selling a reformulated line and the product numbers are identical to the sample tubes I received last fall.  The local art store that carried Mission Gold removed the product after seeing my lightfastness tests last month. They said nothing about being offered the newly reformulated paint that has supposedly been going out to dealers for the past two months.  If you decide to buy this line of watercolors, ask questions and do some research before purchasing.

Here are some ways to check on pigments: both Michael Wilcox's The Wilcox Guide to the Best Watercolor Paints and Hilary Page's Guide to Watercolor Paints are available through online booksellers, although both are now somewhat out of date -- quite a few new pigments have been added to the world of art since they were published.  I also know of two websites that deal with pigments: Handprint and Art is Creation -- Handprint is chock full of information, but the pigment charts on Art is Creation are much easier to read.

I hope you have found this series of posts instructive and helpful. I strongly feel that artists must demand quality materials -- to accept less is to dishonor our time and talent. 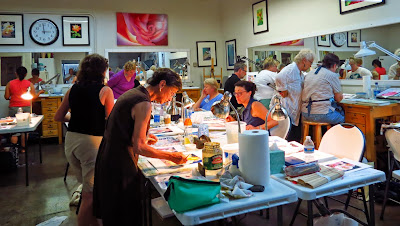 Despite abnormally high temperatures in our area this past weekend, sixteen intrepid artists worked to complete a dramatic floral painting using "un-poured" color blending techniques.  By masking and then dabbing color in loosely with large brushes, we achieved the look of a poured painting without the messiness of splashed paint.  Color was subsequently reinforced or modified and details were added in with a variety of brushes. 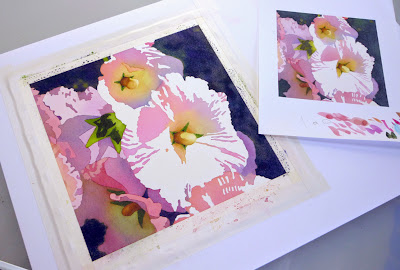 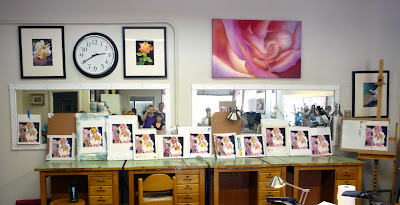 Seeing all the paintings at the end of the weekend was quite a treat!! Although not everyone was able to stay to the finish on Sunday, we had 13 fabulous completed paintings to share!!  (If you'd like to see each of the paintings individually, Guy has posted additional pix on his blog.)

Huge thanks to Guy Magallanes for hosting my workshop.  Guy is the most accommodating and upbeat person -- it's always a pleasure to spend time with him and teach at his studio.
Posted by Chris Beck at 12:06 PM 4 comments: